The term conservative has more than one meaning. In politics, conservative means "disposed to preserve existing conditions, institutions, etc., or to restore traditional ones, and to limit change."

Another consideration is that risk can be asymmetrical. The likelihood that buying fire insurance will bankrupt you is very low. But even though the probability that your house will catch fire is very low, if you don't have fire insurance and your home does burn down, your finances will be in shambles.

There is a fire alarm wailing – people in the know are telling us that climate change will lead to unprecedented chaos. We have been alerted that the fire danger today is extreme. But does the fire brigade even hear the siren? You realize, of course, that losing a planet is far worse than losing your home. A house can be replaced, but good planets are hard to find. (They're scarce and few.) It is highly unlikely that humanity could find another one if ours burns up.

Compared to the asymmetrical risk asssociated with lighting the match that would destroy our planet's experiment in consciousness, the cost of insurance is obviously negligible, even if it turns out to be a full time task for every human being on the planet to put out the fire.

A yardstick against which climate change has been measured is global temperature, influenced in turn by CO2 and other gases in the atmosphere. Another yardstick is the acidity of the oceans. 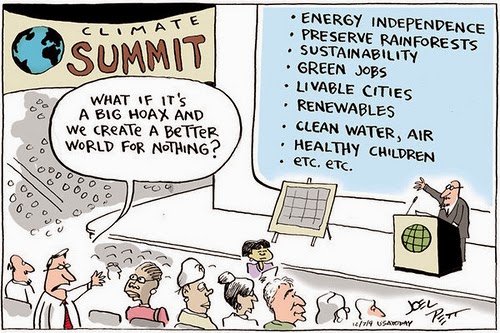 A politically conservative response might be to leave well enough alone: "... disposed to preserve existing conditions..."

For effective risk assessment and decision-making, on the other hand, clearly the conservative estimate would mean to err on the side of doing too much.

In 1824, Elizabeth Heyrick (1769-1831) wrote a pamphlet, "Immediate, Not Gradual Abolition." Her appeal was the first public voice that dared to challenge the notion that abolition must, by its very nature, be gradual and measured. A few years later, one bloody war and the Emancipation Proclamation put slavery to rest.

Many suffered under slavery. Continuing to use hydrocarbons as energy is a death sentence for all. This is a call for immediate, not gradual transformation from illicit energy to renewable energy. Ground transportation can be solar powered. We must prove that it can be done and expand it rapidly to alleviate the suffering inherent in climate change.
Posted by Ron Swenson No comments: