There are conflicting views about nuclear energy vs. renewables in the climate debate. Is nuclear energy safe? Are there sufficient resources and time for renewables to scale up to meet demand as nuclear and fossil fuels are rapidly curtailed? Does nuclear encourage profligate energy use? Is the nuclear industry offering a Faustian bargain to climate restoration advocates?

These may all be useful questions, but there's one overriding concern that affects everyone.

Is there a globally effective government (whether a superpower acting unilaterally or all governments in concert as "united" nations) that has demonstrably kept all nation-states and powerful private interests accountable to clean up the radioactive "waste" from nuclear power plants?


"As of the first quarter of 2019, 162 units are globally awaiting or in various stages of decommissioning... Overall, only 19 reactors, with a capacity of 6 GW, were fully decommissioned ... only 10 have been returned to greenfield sites...

"When analyzing decommissioning policies, one needs to distinguish between the process itself (in the sense of the actual implementation), and the financing of decommissioning...." [The World Nuclear Industry, pg 158-159]

Since radioactivity lasts a long time, is there a robust global government that has maintained stability for several thousand years? No? Well then, it would seem that one more nuclear power plant in the hands of the current club of despots is very risky business (not the least of which is the American nuclear superpower's own home-grown "very stable genius").

Speaking of unsavory characters... the Kock brothers weigh in

Renewables are criticized for using more land than fossil fuels or nuclear power (for example, in The Footprint of Energy: Land Use of U.S. Electricity Production). It turns out that the publisher of this report, Strata Policy Institute, gets it support from incumbents with an agenda:

Now that's not to say their data is entirely wrong, but by publishing independently, they are thereby not under the same rules as academic publications which respectfully require conflict of interest statements.

When you connect the dots, it gets easier to understand what's going on:


Correcting Anti-Renewable Energy Propaganda
"... Renewable energy gets cheaper each year, nuclear power gets more expensive each year — how come they still adamantly claim that renewables are not a cost-effective way of decarbonizing?

The answer, of course, is that the studies are flawed. Taking a look at these studies shows that several patterns can be observed in many of these studies. Among these flaws are ridiculous overestimates of storage requirements, overestimates of grid expansion needs, and the insistence on uneconomical strategies of storing electricity, such as insisting on batteries to store several weeks worth of grid electricity consumption.

It is strange to find someone so gifted as James Hansen caught up in this drama.

We can be thankful for Hansen's monumental contributions to climate awareness. That said, he wrote a bizarre opinion piece 6 years ago, "Renewable Energy, Nuclear Power and Galileo: Do Scientists Have a Duty to Expose Popular Misconceptions?" In this piece, Hansen tackles "Energy misconceptions" (meaning, his views on renewables, as if he were the arbiter who knew what he was talking about). Unfortunately, his understanding of the technology and its applications is limited and his assumptions are far off the mark.

For example, has he scrutinized his cohorts when he joined a presentation with Michael Shellenberger at COP23, in a session titled "Nuclear Power? Are Renewables Enough?"

Shellenberger has been on the take from the nuclear power industry for a long time. He bolsters his creds by weaving a grand story of his conversion from solar. In this presentation, Shellenberger concludes his remarks by invoking the weight of a rock star, Sting: 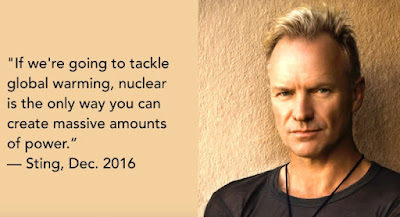 The very idea that Shellenberger would manipulate his audience on matters of engineering and physics by quoting a celebrity whose credentials are limited to having once sung a song, "Nuclear Waste," is plainly fraudulent. Furthermore, Sting advocates for "massive amounts of power" which completely misses the point. What we need is good engineering, to do more with less and stop trying to power a brute force fossil fuelish world with nuclear. We need an elegant new energy system which directs sophisticated energy to where it's really needed.

(At the end of the steam era, locomotives were typically only 6% efficient; a few reached 12%. Diesels came along at ≈20% efficiency and put steam locomotives out of business. Would we now go back and use solar energy to power a steam locomotive? With electric motors at more than 80% efficiency, we can find better ways to move things.)

Can we wean ourselves off fossil fuels?

In that light, a new energy policy editorial ("opinion") just came to my attention, which offers the opportunity to address a gross misunderstanding that prevails in the political community. Here's the article:
In turn, that article makes reference to this list of supposedly great ideas for energy policy:
Now then, let's tease this apart...

Looking at the first article, here's the sweetener (to butter you up as the reader for what's next):

"To begin with, fossil fuels will remain essential since they are plentiful, easy to find, extremely efficient, easy to transport and generate thousands of jobs.

And here's the "clincher," the absurd statement by the "opinionator" ......
"To think we can wean ourselves off fossil fuels any time soon is a pipedream..."

A "pot calling the kettle black," he is the dreamer:
So here's what's going on. Consider the author of the first diatribe -- "Jerry Haar is a professor of international business at Florida International University and a global fellow of the Woodrow Wilson International Center for Scholars in Washington, D.C." Well, first of all, his PhD is in Political Science, not engineering or science, and secondly, what do you make of the scientific prowess of the pretentiously named Wilson Center?
While it might be hard for the layman to understand what's going on with the second article, you have the advantage of starting with what I told you yesterday. Do you think there is a chance that _any_ of the 10 initiatives spelled out, now before Congress, arrived there without bias ... and with an eye to correct the egregious wrongs of the past? I'll leave that for you to dig into. Just looking at who is behind these and who is benefiting would be a great exercise to take on. You can look directly into the search paths I've given you here.

And that leads you to my article, which I referred you to yesterday, available in either of these two libraries (both the same):
Stated differently,

You ask about the adequacy of natural resources for a solar future. It's a good question.

Sunshine is diffuse; we can be very glad for that. Otherwise we would burn to a crisp, of course. The further advantage is that it is universal. Even the Swedes have sunshine ... or I wouldn't be here. Somehow my ancestors managed to thrive in a climate where there was little or no sunshine for months at a time in the winter. (They used solar energy exclusively. We can be at least as smart as our ancestors, don't you think?!)

So how do we handle diffuse energy sources? We use thin energy receptors. It's that simple. I was prompted to post this today when I saw a news article that explains it well:
Speaking of thin, I suggest you watch this long video which explains in a very compelling manner how ideas are formulated out of thin air and then propagated as if they were real:
Solar electricity is so magical that people have a hard time getting their heads wrapped around it. Skeptics with an agenda can have a field day with it because so few people have an idea how it works. (Did you know that Einstein got his Nobel prize, not for relativity (e=mc^2) but for the photoelectric effect, what we now call photovoltaics?!

A note from a friend raised an important point:


The most efficient solar is the sun warming things, right?

That is not how Title 24 thinks, which can drive up energy use. Basically Title 24 assumes outside inputs are bad and the way to manage temperature is to seal a house from the outside - and as efficiently as possible use energy inside. This is based on a lifestyle assumption – that you need to live at a constant temperature. If you are OK with letting the sun in to heat your home and having temperature vary by 10º or 15º over the course of a day Title 24 works against you by limiting glass area while mandating sun blocking windows and roof insulation that prevents internal solar gain.

Yes, he's right and that's a long story. The good news is that Title 24 offers the alternative of demonstrating performance compliance through good design.

So you can hire folks who know what they're doing and prepare calculations which show compliance.  Here are a couple of short web pages explaining the basics:
The most challenging detail to grasp is the Solar Heat Gain Coefficient. Window manufacturers don't want to confuse people with too much information, so they train their sales forces to promote "one size fits all" and for God's sake, don't let the sun come in and fade your drapes and furniture!

So if the customer says "energy conservation," they will get low-e glass (good insulation) with the standard _low_ solar heat gain—which works well on the southwest or west sides of the home, but for windows on the south, very little heat will come in during the winter when it's needed.

You can read glowing reports (such as US DOE's Energy Star propaganda) that will confuse you even more. So instead, here are a couple of articles (one from Canada where there are 4 seasons) explaining why you will want to specify the high solar heat gain coefficient on your south-facing windows:
All the more reason to know your home's compass headings... North-South, East-West.
Posted by Ron Swenson No comments: